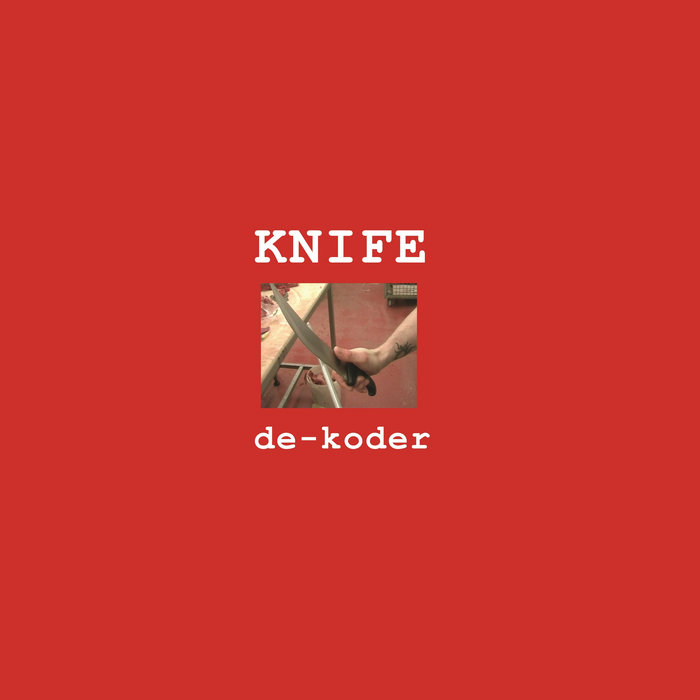 Throughout 1995 and 1996 the Newcastle underground music scene was in full swing with almost everyone in a band of some sort, or making a solo racket in whichever manner they could. The Newcastle punk and electronic music scenes were absolutely firing, and nobody was waiting around for permission to get involved. Everyone was making cassettes and there were several retail outlets in Newcastle (record and clothing stores) that would carry a massive array of these independent Newcastle music cassettes. Amongst the wash of all this ferric oxide based self-expression was a solo artist from the suburbs who went by the name Pendulum (later Decoder). Justin Wolthers was the man behind these aliases, and he was extremely prolific in his output. Justin first appeared on wax as part of the early Bloody Fist compilation 12"s, contributing hardcore and breakbeat tracks (as well as money towards the manufacturing) under the name Pendulum. These contributions to the first 2 Bloody Fist 12"s were a cut above that of the rest of the label's resident gronks, especially in regards to production quality and studio finesse. Justin's overall output was much more diverse than the Bloody Fist material though, encompassing many different strands of electronic-based music from synth-pop to industrial. Instead of settling for the lo-fi sound of obsolete gaming machines, Mr Wolthers utilised real hardware for his music output, featuring an array of analogue keyboards, samplers and effects units to give his music a rich and dynamic presence. During this mid-90s D.I.Y OR DIE period, Justin would go about assembling his work, and regularly deliver it on finished cassettes to several retail outlets, as well as playing the occasional live show where he would pretty much set up his entire home studio (keyboards and all) on stage.

For one of his 1995 live performances at Newcastle's Cambridge Hotel in Newcastle West, Justin re-worked an older industrial track called 'Knife' (that he had written a year or two before) into a masterpiece which featured a heavy pulsating kick drum awash in choiriffic melancholy. This re-work of Knife was made using all Ensoniq EPS samples and a Yamaha SY85 keyboard, sequenced by an Atari STe running Gadjits Breakthru 2 sequencing software. The track did the rounds on cassette for a while, but was largely ignored in favour of all the other higher-profile material going on in Newcastle at the time. Eventually around 2001 Justin self-released an updated CDR version of his original 1996 Decoder cassette 'One All Great Seeing Eye' which featured both the original and re-worked versions of Knife. A copy of the CDR sat around on the desk in the Bloody Fist office for 2 years, and was often played as background music when there was early evening paperwork or shouting at someone on the phone to be done. Following Paulblackout's resoundingly successful FIST30 release, there came a gap in the catalogue, and at some point in late 2003 it was decided that Justin's re-work of Knife would be an excellent '90s throwback' release candidate for FIST31. Paul happened to visit the office one afternoon while this idea was being considered out loud and with a heavy drum & bass angle in mind, was asked if he wanted to remix Justin's 1995 tune. Over the following months, Paul worked on his version, regularly dropping by the office to play his work in progress. Paul's remix of Knife was the last tune he would make using FL Studio, before moving on to Cubase for his post-BF output.

The eventual release of the FIST31 'Knife' record in April 2004 was an absolute clusterfuck of epic proportions. Firstly, there was a potential issue with the artist name Decoder, as there was already a well known and respected UK drum & bass artist (aligned with Tech Itch Recordings) very active at this time. Considering the B-side of FIST31 was a heavy drum & bass track, it was decided that the record might cause an issue due to the fact it may be selling in the same channels / outlets as the UK Decoder's records. Justin was pressured to change the spelling, and reluctantly readjusted the artist name to 'de-koder'. It was also decided that the record would look great in a red 10" sleeve, matching the red 10" vinyl that was ordered from the pressing plant. Due to a communication breakdown, the first pressing that landed at the distributor was actually black instead of red. Stern faxes were sent back and forth, resulting in that pressing being held over while a second emergency pressing of red records was again ordered. The second pressing eventually arrived at the distributor and a somewhat nervous telephone call to the Bloody Fist office was received soon after with the news that they were in fact not red, but pink. At this point the record was already significantly delayed, so it was decided the best plan of attack was to embrace this massive balls-up and get this girly pink Bloody Fist record out there ASAP. The pink versions were cautiously released to the shops, and they absolutely flew out. People laughed their arses off at the mispress, but nonetheless the pink pressing sold out within weeks. The initial pressing on black vinyl was then released and eventually sold out over the next year or so. The red sleeve is one of the most striking in the Bloody Fist catalogue. The front cover picture was taken by Justin inside the meat unit at Woolworths supermarket in the Newcastle suburb of Jesmond. The guy wielding the knife is Brendan Ransom.

Justin is still actively producing music today, alongside being a regular presenter on Newcastle's Radio 1629AM easy listening station(!). His current musical projects and catalogue dating back to 1987 can be found here: trancendentalheadache.bandcamp.com

Written by Justin Wolthers.
Remixed by Paulblackout.
Both tracks built in Newcastle, Australia.