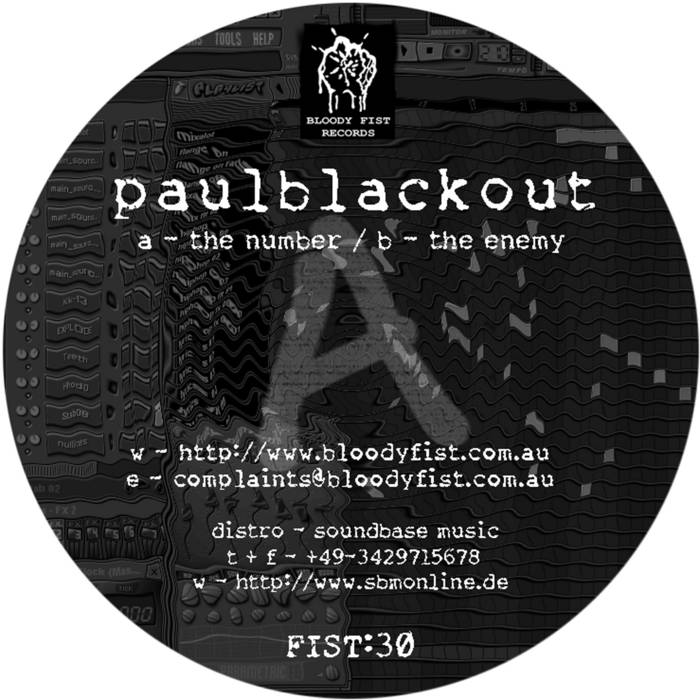 Fallendriver I really liked ' Number one champion Sound' from a few years back and also his 'Desolate Ways' EP ,so this is a must especially because of BF releasing the back catalog on bandcamp.This is loud,so play it so.Ace!

In 2002 Paul Rayner (aka Paulblackout) moved to Newcastle (having previously resided in both Perth and Sydney). Paul had been DJing at various events and would occasionally make the trip to Newcastle from Sydney to buy records from the BF office. He had also been producing and by this stage had released a successful 12" ('Secret Research Facility') on Ruffneck's drum & bass label Ruff-Teck in 2001. Paul seemed to like the idea of baiting the pseudo-glamorous and creatively conservative drum & bass community. These were the people who (on a local level) could always be found deifying a bunch of undeserving sanctimonious British wankers by obediently hyping up whatever twee musical bullshit they were being served without any questions. Many amusing and frank discussions were had during Paul's visits to the BF office about how he was totally unsatisfied with what was on offer from these self-styled drum & bass 'gods'. It was this attitude alone that would start the cogs turning towards a 12" release on Bloody Fist following his move up North.

Shortly after Paul's move to Newcastle he set up studio in the garage at the back of his suburban home, and using the royalties from the Ruff-Teck 12" bought a PC (and a lawnmower). He then got to work using FL Studio 4 (which was being widely slated on drum & bass producer forums at the time) and proceeded to write a bunch of tracks, one of which was 'The Number'. After posting this track on the drum & bass forum dogsonacid.com, the bassline was roundly criticized by forum commenters for being too distorted. This immediately caused the track to be signed as the A side of Paul's forthcoming Bloody Fist 12". (As an interesting aside, this criticism also led to further distortion experiments resulting in the track 'Land Whale' - which in turn resulted in sneery forum comments that the bassline sounded too much like 'metal guitar'. Of course these forum comments then directly informed Paul's guitar sample-driven classic 'Revolution'. Both tracks were eventually released as a killer 12" on Hardline later in 2004).

After 'The Number' had garnered its initial delicious internet reaction, the Bloody Fist 12" was then assigned a catalogue number (FIST30), tweaked, mixed, mastered and finally released in late 2003. It featured slapped together label artwork consisting of smart-arsed FL4 screenshots, and a B side track titled 'The Enemy' which had been composed almost entirely using one particular VST freeware synth (pure producer sacrilege!). The 12" was mastered in the UK by Shane The Cutter, and is one of the loudest records you will ever hear. Curiously, there are no matrix inscriptions on the record and the entire pressing features inaudible but visible surface marks which are a result of the lacquer master discs accidentally rubbing together during transit between the UK where they were mastered, and Germany where they were processed into stampers. The record did exceptionally well upon release, being distributed by both hardcore and drum & bass distributors simultaneously in several territories at the time. It was repressed several times from the original metalwork, and there are a few residual unplayed copies which can still be found floating around all these years later (check the BF bandcamp merch).

Although Paul would probably never admit it, that lawnmower he bought with the Ruff-Teck royalties would go on to have a massive influence on the bassline in 'The Number' (have a listen to it and judge for yourself). This theory was proven when a sniffy and cretinous Sydney record store employee derisively referred to the record as 'lawnmower music' upon hearing it just after its release. Perfect.

Paul continues to produce and tour currently, as well as running the Hardline Rekordingz label which he took over in late 2003.