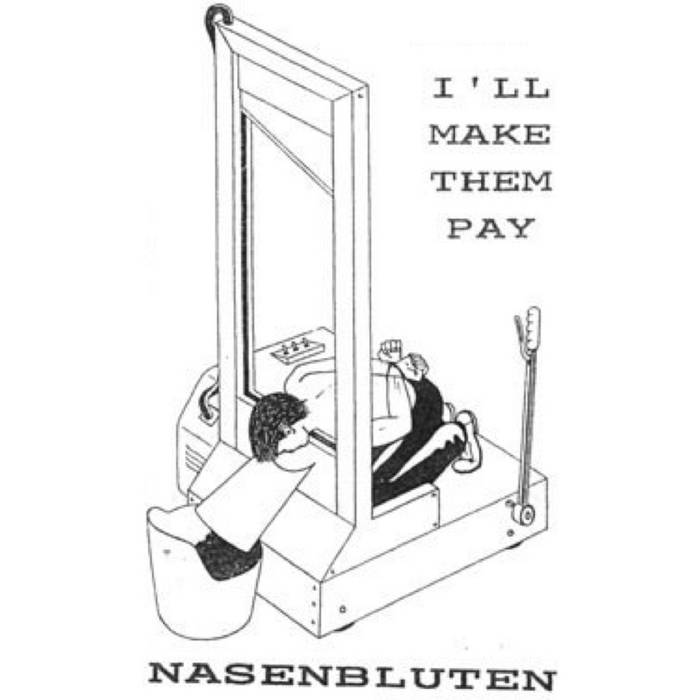 Death Itself Literally impossible to pick a favorite track on this heater. furiously paced hardcore & breakcore strictly for those with a sardonic sense of humor and levity. Amiga heavy damage; insanity inducing headbutting; floor stomping ferocity from down fucking under.

Ear of the Beholder

Continuing on from where all that idiotic lo-fi sample buggery left off in late 1993, Nasenbluten managed to excrete a further 90 minutes of hissy, tinny, ‘good-lord-make-it-stop-core’ during the first few months of 1994. The finished result was a hand-dubbed and assembled cassette, prophetically and ironically titled “I’ll Make Them Pay” ($9.99 24 years later in fact). By this stage in ’94, David Melo had graduated in the band from live-performance-video-bloke, joining Newlands and Lubinski as an actual track producer and making two contributions to the album’s final tracklist.

Most reasonable people would have recognized what had just happened and avoided any further potential embarrassment by looking for a new direction after 1993’s blizzard of nauseating sampled pop culture with breakbeats dropped in on top and distorted kick drums jammed in underneath, but in order to be old and wise, one first must first be young and stupid. So once again, the cesspit of omnipresent cultural sewerage was relentlessly agitated until it whipped up into a violent storm of unhygienically low sampling rates and tasteless, childish, deliberately offensive Amiga-driven repetition. The eighth circle of absolute hell captured on ferric oxide.

From a production standpoint, little had changed since the previous 1993 “You’re Going To Die” cassette, with the Amigas still front and centre running ProTracker. One notable difference on some of Lubinski’s new material was the introduction and usage of a Roland Jupiter 6 analog synth, which he’d acquired from a local hock shop. This was somehow hooked up via MIDI to the Amiga, and triggered via OctaMED, resulting in the live analog synth parts which can be heard throughout tracks such as ‘The Lambert Walk’ and ‘Frozen Shit’.

Apart from the addition of the Jupiter 6, material was sourced (as usual) from whatever was switched on and able to be jacked into the Amiga at any given time. The low hanging fruit was always FM radio - and it exists on this album in absolute spades - from Queen to Joe fucking Cocker to Whitney Houston to Ace Of Base. All this, amongst bits of radio ads and arsehole DJs bloviating their way to another pay packet were scavenged and hurled forcefully into the rotzooi. That’s not all though, bits of sped-up rap records, breakbeat records, hardcore records, techno records, industrial records, kids records, movies, comedy shows, sound effects records, recorded phone conversations, other people’s Amiga MOD files, moronic radio talkback and news reports were all divorced from their original contexts and frotted uncomfortably against each other until the entire 90 minutes began to resemble the audio equivalent of some sort of squalid rat’s nest.

All embarrassing material by Newlands / Lubinski / Melo. 'Another Kick In The Head' was originally a 1988 tape loop piece by Generator (Justin Wolthers) titled 'Cook In The Bathroom', remixed by Lubinski for this album. The 90 minute cassette was released in May 1994, and is the 4th full length release on the pre-Bloody Fist 'dEAd GirL' imprint. It was sold through C&C Records in Newcastle, by mail order and through a few stores in Sydney. The cassettes were all individually hand-assembled, dubbed, glued, cut and folded. The cassette has been captured here from the original deteriorating 1994 cassette master with all original recording artefacts - earth hum, crackles, distortion, drop outs, tape swim and hiss - left fully intact for that authentic feel of how fucking shithouse everything was.